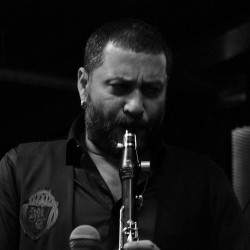 Husnu Senlendirici is a clarinet player in 1976 in Bergama. Husnu comes from a family that is fond of music. His granfadher used to play the same instrument. Husnu was fond of Clarinet since he was five years old . As he grew up, he joined a band that was was formed by Maestro Okay Temiz and participated in tours with them. He joined other bands before he formed his own band ( collaborating with a renown band from USA). The, Husnu formed "HUsnu and Friends" to bring the Turkish music to more and more listeners in the world.