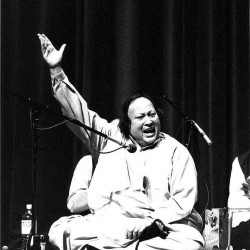 Nusrat Ftaeh Ali Khan is a Pakistani musician and singer born in Faysal Abad in 1948. He is a Qwwali singer (Qawwali is a devotional music fot the Sufis). What most distinguishes him are the vocal abilities he has. Nusrat Fateh Ali Khan has the ability to perform high and intense vocals for many hours. Many of his works were produced and were met with large success. Nustar Fateh Ali Khan collaborated with many international artists and production companies. Khan entered the Guiness book as the artist with the largest number of musical productions of Qawwali music: he produced more than 125 albums since 2001. He had many titles and awards like the UNESCO Music Prize in 1995, Grand Prix des Amériques at Montreal World Film Festival in 1996, the Arts and Culture Prize of the Fukuoka Asian Culture Prize in 1996, the "Legends" award at the UK Asian Music Awards in 2005. Nusrat Fateh Ali Khan is inscribed within the international repertoire of iconic artists of all time.