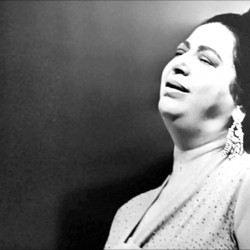 Umm Kulthum, whose original name is Fatima Ibrahim Beltagi, was born on 30 December 1830 ans died February 3, 1975. Umm Kulthum was an internationally famous Egyptian singer, songwriter, and film actress as early as the 1920s and up to the 1970s. She is given the honorific title, Kawkab al-Sharq كوكب الشرق ("Star of the East"). Umm Kulthum was and is still regarded as the greatest Arabic singer.